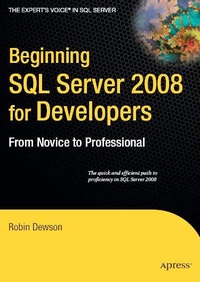 Robin Dewson has been hooked on programming ever since he bought his first computer, a Sinclair ZX80, in 1980. He has been working with SQL Server since version 6.5 and Visual Basic since version 5. He now works on C# and VB.NET and now investigating the world of Java. Robin works in Canary Wharf in London, where he has been for over eleven years. He also has been developing a rugby-related website as well as maintaining his own site at www.fat-belly.com.