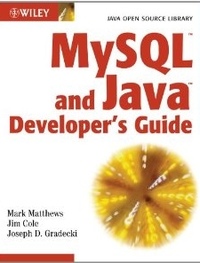 
Описание книги MySQL and Java Developer’s Guide:
With more than three million users, MySQL is the most popular open source database server in the world. It is the most popular database server for Linux and also runs on Windows, Macintosh, FreeBSD, and many flavors of UNIX. Most developers have built MySQL applications using programming languages like C, PHP, and Perl, but three years ago the author of this book, Mark Matthews, created MM.MySQL, the Java driver for MySQL.

Since then, MySQL AB has shown their support for Java developers by hiring Mark, adopting his driver, and re-releasing it as Connector/J. Now, Mark Matthews and team explain everything you need to build database applications with MySQL and Java.

This book is a complete and authoritative tutorial and reference on MySQL for Java and takes a hands-on, code-intensive approach so you can learn how to build sophisticated Web database applications.