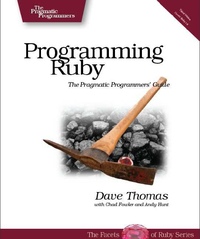 
Описание книги Programming Ruby 1.9: The Pragmatic Programmers\’ Guide:Would you like to go from first idea to working code much, much faster? Do you currently spend more time satisfying the compiler instead of your clients or end users? Are you frustrated with demanding languages that seem to get in your way, instead of getting the work done? Are you using Rails, and want to dig deeper into the underlying Ruby language? If so, then we’ve got a language and book for you!