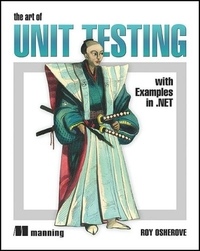 
Описание книги The Art of Unit Testing: With Examples in .Net:
Unit testing, done right, can mean the difference between a failed project and a successful one, between a maintainable code base and a code base that no one dares touch, and between getting home at 2 AM or getting home in time for dinner, even before a release deadline.

The Art of Unit Testing builds on top of what's already been written about this important topic. It guides you step by step from simple tests to tests that are maintainable, readable, and trustworthy. It covers advanced subjects like mocks, stubs, and frameworks such as Typemock Isolator and Rhino Mocks. And you'll learn about advanced test patterns and organization, working with legacy code and even untestable code. The book discusses tools you need when testing databases and other technologies. It's written for .NET developers but others will also benefit from this book.